Climate Reporting: Tips from Our Newsletter

The guidance below collects the thoughts, tips, and must-reads about reporting on the climate crisis published in our weekly newsletter, Freeze Frame. The information is presented in roughly chronological order, has been edited for clarity, and is updated where necessary.

What’s the best term for a journalist to use, climate “crisis,” climate “emergency,” or something else?

This is a complicated one, because the question here is not just one of accuracy but also one of urgency. Terms like “global warming” and “climate change” don’t correctly describe the varied and vast human impact on the environment, and they also don’t match the urgency of the moment that journalists should seek to communicate. And what is the point of matching urgency (or journalism, for that matter)? Eliciting action, yes?

Though both “crisis” and “emergency” accurately address this urgency, as Grist recently reported, research shows neither term is enough to prompt action among audiences by itself. In fact, among some audiences “crisis” elicited the least concern while climate “disruption” performed better. So, while all are accurate, the real lesson from this research is that, while this treadmill of terms may continue to update, labels alone cannot spark the change we need to mitigate damage done to our environment. What audiences really need is reporting that supports this urgency by emphasizing what solutions are available and how we can act on them.

As climate journalism expands, so does the research into how it’s done best. Here are a few tips I’ve found among this research.

Coverage of the ‘code red’ climate report was good. Here’s how to sustain it.
Andrew McCormick, Columbia Journalism Review
For more advice on climate coverage, check out this preview of what’s coming up on the climate beat, including a crucial UN conference.

Emily Atkin Talks about Objectivity and Covering the Climate Crisis
María Paula Rubiano A., The Open Notebook
The ongoing objectivity discussion is crucial for the well-being of the news industry and thus our communities. With this Q&A with Emily Atkin, The Open Notebook adds an important chapter. Atkin, a climate journalist and creator of the newsletter Heated, will change the way you think about the power dynamics in climate crisis journalism and the origins of climate denial.

Stop calling them “accidents”
Marin Cogan, Vox
Jessie Singer, author of new book There Are No Accidents, sat down with Vox for an interview about the way we brush off accountability for fatal consequences with one simple word.

The audacious PR plot that seeded doubt about climate change
Jane McMullen, BBC News
BBC News has dug into a public relations campaign that may have changed the course of history 30 years ago by convincing public officials not to limit fossil fuel emissions. It is a must-read for journalists since placing stories, quotes, and opinion pieces in the news media was a linchpin of this damaging plan.

The world as we know it is ending. Why are we still at work?
Anna North, Vox
This Vox article may sound like a bit of a downer — and frankly, it kind of is. But it’s also a realistic, incisive look at how capitalism rules all when it comes to the many crises humans currently face. Awareness of worker exploitation and the iron grip work has over our lives is the first step to creating change.

“This stuff” MSNBC host Chris Hayes refers to is the climate crisis and specifically Sen. Joe Manchin’s opposition to instituting a carbon tax in the U.S. It’s a worthy reminder to anyone reporting on climate legislation that the stakes are much higher than frames that pit lobbyists against activists might suggest. 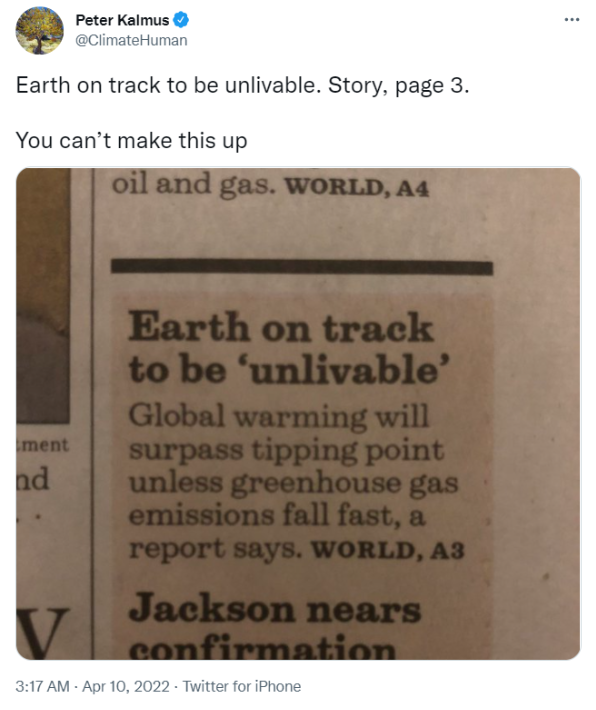 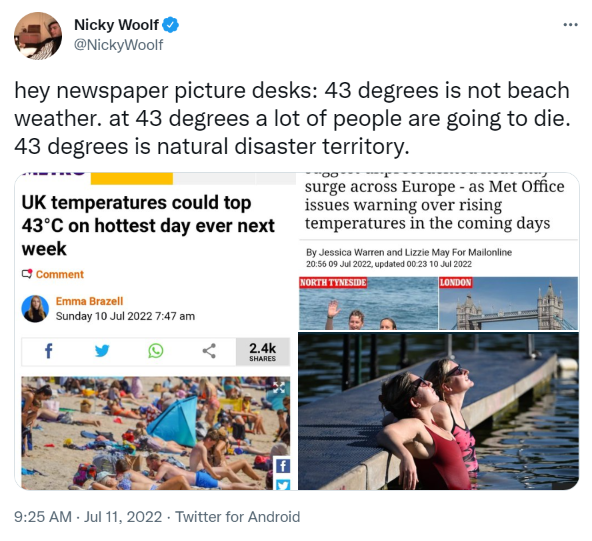 For those of us used to Fahrenheit, writer and podcast host Nicky Woolf, is referring to temps of 109 degrees in the UK. Woolf is right: this is not “beach weather” and thus this news should not be accompanied by pictures of fun in the sun because it inaccurately depicts the harmful effects of this heat.

This New York Times headline about the Build Back Better plan has been, for lack of a better word, roasted on Twitter. That’s largely due to it referring to programs that support sustainable transportation, pregnant people, local journalism, and fighting the climate crisis as “niche interests.” But using scare quotes around tree equity — an admittedly buzzword-y phrase that refers to planting trees in neighborhoods that aren’t receiving the climate- and health-related benefits of tree cover — deserves special attention.

Scare quotes are the rhetorical equivalent of an eyeroll. One could argue that they’re used here to denote an unfamiliar phrase, but what is journalism’s job if not to educate the public about new ideas and events? This small punctuational flourish sets up those learning about tree equity for the first time to think of it as silly and dismissible. Think what you want about tree equity programs, but a headline is no place to editorialize this way. A more straight-shooting headline might look like:

The headline above, from the Washington Post, is much like dozens of other headlines announcing a report on sea level rise that was released February 15, 2022. Many used the phrases “rise one foot” and “by 2050.” I honestly didn’t think much of this headline or the news it carried (beyond, “more bad climate news, got it”) until I read CNN’s different take, below.

What does one foot of sea level rise in 30 years look like, really? How fast is that in comparison to the sea level rise we’ve experienced in recent years? To me, the phrase “will rise rapidly” hints at the answers and paints a much more urgent and accessible picture than “rise one foot.”

Similarly, “in the next 30 years” also felt more specific and real than “by 2050” which sounds impossibly far away, but isn’t. The next 30 years is simply a doubling of my personal lifetime, which hasn’t felt very long at all. That reframe really struck a chord with me. It’s important that journalists keep in mind that a slightly different word choice can make important news that much more relatable or salient to a reader.

A high-pressure weather system led to massive heat waves across much of the Northern Hemisphere in July, with its effects being keenly felt in the U.S., Europe, and China. It seems like every news outlet has a story with a variation on the CNN headline below. But the people experiencing a heat wave don’t need to be told it’s hot.

What do they need? Most immediately they need information on staying cool and finding local resources and support, like the report below from WHDH in Boston.

Secondly, they need to know whether their locality is prepared for future heat waves (the New York Times headline below says that’s a “no” for London) and, if not, how they can be.

Finally, they also need to know both the cause (humanity-driven climate change) and the impact (death and displacement) of this extreme weather. Reuters tackles the cause in the headline below. A mix of these tactics helps audiences get the full story beyond “it’s hot.”

Jackson, Mississippi is experiencing a significant climate emergency after flooding of Pearl River exacerbated an already stressed water system. Residents have been under a boil water advisory since July and now many are without water at all. The failing water system is nothing new. As the NPR headline below describes, this most recent crisis is the result of years of neglect.

But that’s not the full story. The neglect of the Jackson water system is a direct result of white flight in earlier decades and disinvestment in infrastructure in Black communities. The Slate headline below tops an interview with environmental and climate justice activist Catherine Coleman Flowers and addresses this head-on. Though the NPR story does mention that a shrinking population and lack of political will led to this crisis, it doesn’t name the elephant in the room.

Looking at other Jackson headlines, I also wanted to point out how slightly different framings can go a long way in humanizing this crisis. The first headline below is from the BBC; it’s not inaccurate and describes two pretty stark consequences for Jackson residents.

But the Buzzfeed headline below goes the extra mile by noting just how many people are impacted. It also translates what the “no water to drink or flush toilets” really means: it’s a matter of survival. This urgency feels appropriate to the crisis.

The flooding of Pakistan. Record-breaking heat and wildfires in California. A water crisis in Mississippi. Extreme droughts in the southwest U.S., southern China and Iraq. It’s been a scary few weeks for climate crisis news and the headline above from The Guardian makes that all too clear. Then the phrase “another week” adds a droll tone that doesn’t exactly inspire confidence in solutions to this most dire threat.

It can be easy to get caught up in the fatalism and depressing nature of climate crisis coverage. But there are still things we can do as a species to mitigate the effects of manmade climate change — and it’s journalists’ responsibility to make that clear to audiences.

The headline below from NPR has the best of both worlds. It doesn’t deny the deluge of difficult news, it embraces it and promises solutions. I love this combination of addressing the psychological effects of this news so that one can help create change, too. It’s a great service for audiences.