Reporting on Economic Inequality: Tips from Our Newsletter

The guidance below collects the thoughts, tips, and must-reads about reporting on economic inequality published in our weekly newsletter, Freeze Frame. The information is presented in roughly chronological order, has been edited for clarity, and is updated where necessary.

What’s the best way to describe the tight labor market in the U.S.?

Many outlets have been referring to this supply-and-demand problem as a “labor crisis” or “worker shortage,” but these phrases are imprecise. While November 2021 reports said there were more jobs than jobless people in 42 states, we’re also experiencing “The Great Resignation,” during which a record number of Americans are quitting jobs because they are less willing to accept low pay, insecurity, and inflexibility in the workplace. The term “labor shortage” does address a supply-demand gap, but it doesn’t capture why many are leaving the workforce. Labeling the crisis by its roots rather than its result helps audiences understand systemic cause and effect. When describing why people are leaving the workforce, for instance, “living wage shortage” or “benefits crisis” might be more accurate.

What’s the difference between “low-wage” and “low-income?”

The phrases “low-wage” and “low-income” are often used interchangeably when referring to workers, but I do believe there is a subtle important difference that journalists and word-nerds should pay attention to. Income refers to what someone receives, implying the recipient has the agency in what they’re receiving. Whoever’s on the other end of this give-and-take is absent in that phrase. (I.e., if your income is low, it’s on you.) A wage, however, refers to what someone is given by their employer; the employer has the agency. (I.e., if your wage is low, it’s on your employer.) So, in discussions about workers and how wages are affecting employment, economic security, and public health, using “low-wage” to focus on what employers are paying workers is likely more appropriate.

Economic news moves fast, so following the trajectory of inflation or a potential recession can be tough for audiences. Layer on financial jargon and pretty soon you’ll find readers and viewers tuning out news that they need to thrive. How can journalists help explain it all? Turn to service journalism.

“Service journalism, of course, is a new term for an old idea: giving readers good, practical advice — what to buy, where to go, how to do a certain thing — to make their lives easier. While service journalism shares the same standards of truth and fact-finding as regular reporting, it requires a different approach. The biggest shift: The reporter’s lens moves from the subject to the reader.” — The Reynolds Journalism Institute.

Use the links below as guideposts. Each piece uses a different tactic to make economic news useful instead of stenographic.

This headline comes from KPIX, the CBS affiliate in the Bay Area, but it is far from the only time we’ve seen a story about homelessness center those who witness it rather than those who experience it. Framing a story in a way that positions threats to those in luxury condos as the primary impact of homelessness — rather than, say, the lack of safety and support felt by people who are actually experiencing homelessness — misses the point. If journalism seeks to help society deal with its collective problems, focusing on what support is needed by those without secure housing (and why they are not receiving it) is the right place to start.

For an example of what centering the narratives of those experiencing homelessness looks like, check out the San Francisco Chronicle’s “Homegrown and homeless in Oakland.” It privileges the stories of four local residents from a systemic, solutions-driven angle.

The first headline above is from a January 7, 2022 Associated Press story about a Labor Department jobs report. The second headline is from a Washington Post story — also published January 7 about the same exact report. Though both make accurate statements — unemployment did decline, and the economy did add 199,000 jobs — very subtle language choices give them very different framings.

AP chose to highlight lowering unemployment and “many more” people finding jobs. Both of those are widely regarded as good things, so this sounds like a positively framed story. The WaPo headline is decidedly more negative, all thanks to the word “just.” By using “just 199,000 jobs,” the reader is to understand that that number is not high enough. By what measure is unclear. Did experts predict a higher number? Does it vastly undercut current needs of the market? That question is almost unnecessary to answer because, such as you might lament, “there’s just one cookie left in the jar,” the message is clear: not good.

Though usually I use this space to mark a clear “do this, not that” conclusion, that’s less important to me here than the lesson the juxtaposition provides. The monthly jobs report is consistently reported on across major news outlets and often seen as a barometer of the economy. If two broadly trusted outlets can frame the same information so differently, it’s clear how turning to just one source for all of our news is fraught. Just like you should eat a variety of fruits and veggies, you should consume a variety of news. For even more comparisons on job reports headlines, check out media critic Dan Froomkin’s site Press Watchers.

The headline above, from ABC news, references the 2022 County Health Rankings report published by the University of Wisconsin Population Health Institute. From the story:

“The data reinforces what we’ve known for some time. People in both rural and urban communities face long-standing barriers, systemic barriers — avoidable barriers — that get in the way of groups of people and places in our country from being able to live long and well,” Sheri Johnson, co-director of County Health Rankings & Roadmaps and director of the University of Wisconsin Population Health Institute, told ABC News.

The acknowledgement of these systemic and avoidable barriers makes describing improved economic futures as “out of reach” an odd and fatalistic choice. The report does describe major inequality, but it does not, as far as ABC News reports, suggest it is mysteriously insurmountable or natural to U.S. life. Instead it clearly describes it as essentially man-made. The headline below, from United Press International, makes plain what the solution to this man-made problem of low, unequal wages is: pay increases! (From, one could infer, those creating the inequality.)

It’s crucial to understand how journalists play a role in establishing what is possible in the public discourse. This is a perfect example of two news outlets highlighting the same problem and framing the potential for that problem to be solved completely differently.

I have tried to ignore the discourse around “quiet quitting” (the act of doing what you’re paid to do, and nothing more; yes it’s poorly named) over the past few weeks. But I couldn’t escape articles by the Wall Street Journal, Fortune, Newsweek, ABC News, The New York Post, Refinery 29, HuffPost, Fast Company, Mic, and many more local and digital outlets.

I could write an essay on how the volume and trajectory of coverage of “quiet quitting” illustrates many problems of the news industry. (It followed the same path of so many other social media-mined stories: an explosion of shallow explainer articles titled with anxiety-inducing headlines, all soon to be forgotten. Is that time well spent? Do audiences walk away more informed?) Instead I’ll focus on the ways two headlines framed this “trend.”

I put “trend” in quotes because, while it is a social media “trend,” the spread of worker-focused resistance to capitalist burnout is no fad. In fact, that’s what many of those discussing the idea on TikTok are saying. The headline above from TODAY, however, likens it to any other social trend. Plus, by leaving the content of the discourse a mystery, it creates fear of the unknown. After all, “quitting” “taking over” during a strained labor market certainly sounds serious, especially to those who employ others.

The Independent does its readers a service in the headline above by not only describing the trending topic but by explaining its true nature. It’s about “acting your wage” and rejecting hustle culture, not actually quitting. Which, as many have found during the pandemic, is healthy! Framing such a mentality as mysterious or scary is disingenuous and de facto supports exploiting free labor.

I typically avoid using examples from Fox News in this space. That’s largely because I agree with media scholar Dan Froomkin that what the channel produces is not accurately described as news but is instead propaganda. It’s also because the juxtaposition such an example would create is often laughably transparent in its partisanship. Today I feel the comparison is worth making.

In August the Biden administration announced its long-awaited student debt plan. The Fox headline above makes no attempt to hide its opinion on the facts of the news. It refers to student loan forgiveness as a “handout,” a term long used to pejoratively describe public assistance. It also chooses to place the announcement against the backdrop of “as national debt soars. ” (This explainer from Quartz shows why the national debt is used as a scare tactic to avoid public spending, if you’re curious.) Fox could have easily chosen to end the headline with “as student debt soars” but that would paint the announcement in a positive light, which is not the goal here.

In contrast, the Washington Post’s headline tells it straight: what’s happening (loan cancellations) how it’s happening (who gets what money) and who’s doing it (Biden). No naked partisan slant to be found. 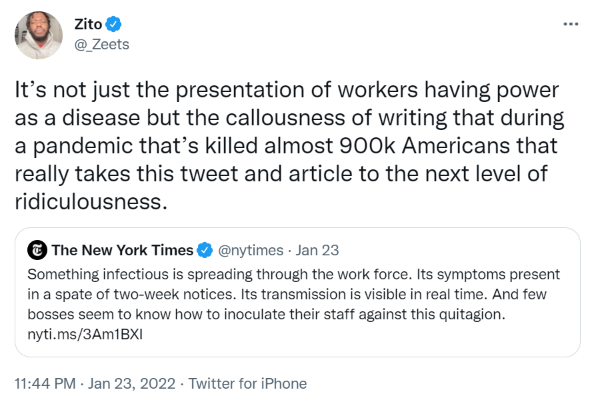 Couldn’t agree more with writer Zito Madu here. Language is a powerful thing and so much of communication requires using comparisons to help others pick up what you’re putting down. This social media presentation uses a metaphor to describe workers making the choices that feel right for them like a disease, a frame so negative and pro-capitalist it’s hard to overcome, regardless of the article’s contents.

Re: an earlier Headline Check, The Hill reporter Zack Budryk gets to the heart of what reporting on this “trend” is all about.